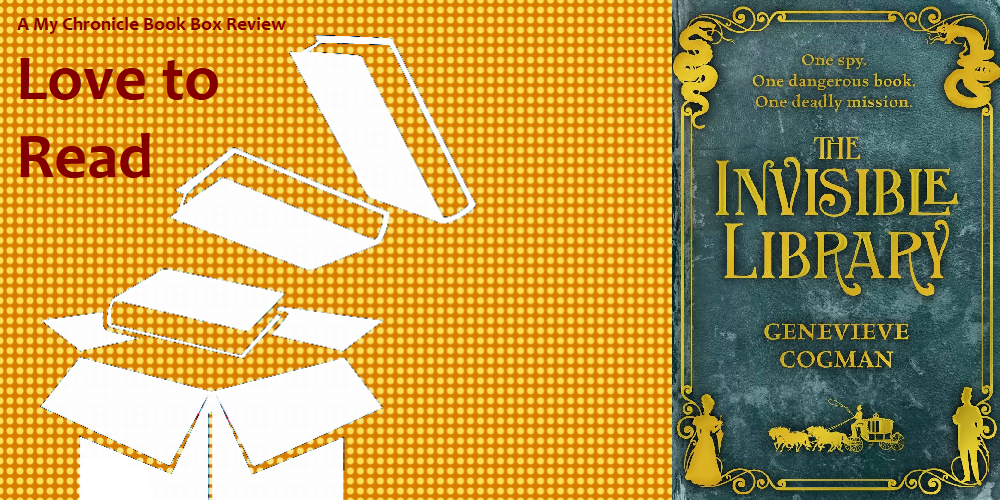 I attended the book signing of another author at my local Waterstones and was made the recommendation of this, the debut novel of Genevieve Cogman, whilst chatting in the queue. With the promise of an invisible library with librarian spies on a deadly mission, how could I resist? I purchased it immediately and was not disappointed

Irene is our protagonist and a junior Librarian at The Library. The capital letters are warranted as this is no ordinary lendng library, but the ultimate reference library that exists out of time and in its own dimension. The Library has access to all other alternate worlds and its raison d’etre is to acquire and preserve important literature from these alternates (quite possibly by whatever means necessary). It is inaccessible, and thus invisible, to all except Librarians and trainee Librarians.

In this first book Irene is sent on a mission to a chaos infested Victoriana London with the darkly handsome trainee Kai whom Irene has just met and has secrets of his own. That the whereabouts of the book Irene and Kai are seeking is unknown and its last owner has been murdered (with his head being impaled on the railings outside his front door for good measure) is the least of their troubles. In this particular alternate world we encounter with Irene and Kai werewolves, vampires, fae, zeppelins, river spirits, a traitor of The Library, cyborg-alligators, dragons and perhaps most horrifying of all Library politics. Irene is equipped simply with her wits and the Language, a type of power (not magic or sorcery we are told) granted by her ties to The Library to command the world immediately around her.

When you consider all the elements Genevieve Cogman is including in this novel it could easily have become confusing and fragmented but in my opinion this has not happened. I applaud Genevieve Cogman for creating a unique fantasy setting which she anchors sufficiently to allow for a fast-paced and exciting detective mystery to flow. Did I mention Irene finds her very own Sherlock Holmes style Great Detective in this alternate (or rather he finds her)? The majestically named Peregrine Vale completes the mystery solving trio, though his agenda is somewhat different being a native of the alternate and not an agent of the Library. I love the interplay between the detective trio of Irene, Kai and Vale which is wonderfully humorous and a joy to read. For me, Genevieve Cogman achieves a great balance between dialogue and action which keeps the story flowing and the reader turning the pages, unable to put the book down.

Definitely a must read for all fantasy and detective mystery fans.

Hi, I'm Louise the founder of My Chronicle Book Box and I hope you have enjoyed reading my blog post.

Here at MCBB we are proud to have put in the hours reviewing, shortlisting, considering publishing schedules and ultimately selecting what we think are the best books for your book box. From our rural Yorkshire base we curate stunning book boxes filled with the latest novels signed by the authors, exclusive author interviews and top quality bookish goodies, which we send to our wonderful customers all across the UK and indeed the world!

We compliment the selected books with a range of hand-picked related treats for the ultimate book subscription box reading and unboxing experience.

Please visit our Gifts for Book Lovers page for bookish gifting ideas for friends and loved ones.

Hi, I’m Louise and I am the driving force behind My Chronicle Book Box. I am a busy working Mum, with three gorgeous daughters and a very supportive husband. I spend much of my spare time reading and reviewing a wide variety of books and love the whole idea of subscription book boxes.

2 thoughts on “The Invisible Library by Genevieve Cogman”

“It is worth every penny”